Things you didn't know about Waffles

August 20, 2012 / admin@wafflehouse / Comments Off on Things you didn't know about Waffles

If you thought there wasn’t anything you didn’t know about waffles, you may be surprised to know these interesting facts about our fabulous gold and crispy treats.

Each country has its own variation on the waffle. From America to Scandinavia, Belgium to Holland, and even Hong Kong, waffle varieties abound. The major difference one notices between these waffles is their shape. The American waffle has a similar deep pattern to the Belgian waffle, but is round. The Belgian waffle is rectangular. The Scandinavian waffle is often made in a flower-shape. The flower is made up of four heart-shaped sections joined together. The Dutch waffle looks more like an enlarged wafer. It is round with a shallow pattern. The Liege waffle is smaller and more organic looking, like a crumpet, it doesn’t have a perfectly round or square shape. The Hong Kong waffle looks like a bunch of little cupcakes joined together. The “cupcakes” are egg or oval shaped.

The origin of waffles can be traced back to ancient Greece where two metal plates acted as the waffle iron. However, it has been noted that waffles were also made in China. The Chinese waffles used different ingredients and not the eggs and milk we use today.

In earlier times, waffles didn’t always come with the grid pattern that is common today. Our forefathers were much more creative, choosing to make their waffles with landscape designs and some even including their coat of arms. Anyone for personalized waffles?!

The inventor of the waffle iron did not like waffles himself! He never knew what he was missing! 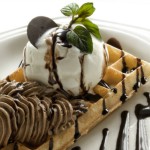 If you are a true waffle fan, then why not take advantage of our Loyalty Card Programme. After all, what could be better than getting quality waffles for free!!

Posted in Blog
We use cookies on our website to give you the most relevant experience by remembering your preferences and repeat visits. By clicking “Accept All”, you consent to the use of ALL the cookies. However, you may visit "Cookie Settings" to provide a controlled consent.
Cookie SettingsAccept All
Manage consent

This website uses cookies to improve your experience while you navigate through the website. Out of these, the cookies that are categorized as necessary are stored on your browser as they are essential for the working of basic functionalities of the website. We also use third-party cookies that help us analyze and understand how you use this website. These cookies will be stored in your browser only with your consent. You also have the option to opt-out of these cookies. But opting out of some of these cookies may affect your browsing experience.
Necessary Always Enabled

Performance cookies are used to understand and analyze the key performance indexes of the website which helps in delivering a better user experience for the visitors.

Analytical cookies are used to understand how visitors interact with the website. These cookies help provide information on metrics the number of visitors, bounce rate, traffic source, etc.

Advertisement cookies are used to provide visitors with relevant ads and marketing campaigns. These cookies track visitors across websites and collect information to provide customized ads.

Other uncategorized cookies are those that are being analyzed and have not been classified into a category as yet.